Todays post comes from http://www.grammar.net/misspelledwords I cannot tell you how often I get called on the table for grammar. I am always looking for ways to reduce my mistakes. I found this chart and the subsequent list and thought I would share. 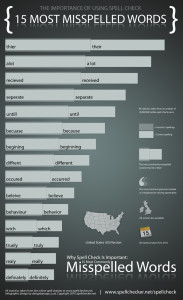